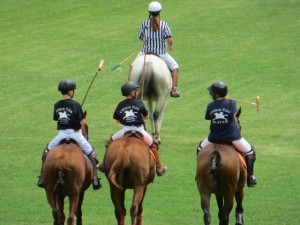 Have you been to a match and wondered why the players wear why pants, or why a length of play is called a ‘chukka?’ Well, you aren’t the only one. Today, Chukkar Farm attempts to answer some of the most commonly asked questions about the game of polo.

Why is everyone wearing white pants?

The game of polo started in India, where it’s very hot. So, players preferred wearing light colored clothing. Did you know that Brooks Brothers developed the button down collar specifically for polo players who wanted to keep their collar tabs from flying in their faces? Equestrian sports have had more influence on your daily fashion than you might think.

Where are the ponies’ manes and tails?

Free flowing long hair is a hazard in polo – whether on a player or on a pony. That’s why female players keep their hair tucked up, underneath their helmet. The ponies will have their manes shaved (roached) and their tails braided and wrapped up to prevent them from getting caught in the reins while the rider is trying to steer, or in the mallet while trying to swing.

What is a score called, and why do teams change direction each time a score is made?

Points scored in polo are called goals, which is rather straightforward. But, why do teams change direction of play each time a goal is scored? One theory is that fields used to run east-west and neither team wanted to play for long with the sun/wind in their faces. That’s a great theory but now most fields run north-south. Either way, we know the practice dates to at least 1973, when England’s Hurlingham polo Association drew up its polo rules.

Do you have a question in particular about the game of polo? Comment below and let us know! We’d be happy to answer it for you.